ChelationNation.info
"Affinities" means that each chelator...        ...has a list of its favorite metals.

Chelators Always Eat Their Desert First
Molecules have their own preferences
When metal ions (tiny sticky atoms) get stuck on large  charged chelators (large sticky molecules) it works like oddly matched velcro.  Some velcros are strong together.  Some velcro combinations are weaker together.
Up To Date Resources                       Real Science                     Bias Toward No One
Chemistry does not care about your "plan".  Even if you have chosen the best chelator for the metal you want to remove, and even though you are using it correctly, sometimes, you must wait while your chelator gets done binding with something else first.   In the animation below,  the blue chelator may skip over the undesirable metals and continue to eat the ones it likes best, until there are very few of those left to eat.  Only then, will it come back for the ones you're after.  In this case, the broccoli. 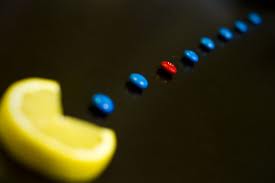 Aluminum
Arsenic
Cadmium
Gadolinium
Lead
Mercury
Nickle
Each chelator will eat its own favorite elements before it can get to the element you want it to remove.  Just be patient...
Tetracyclines
"-cycline"

ANTIBIOTICS: SOME TYPES MAY ACT AS PARTIAL / UNSAFE CHELATORS !

DO CHELATORS REMOVE THE GOOD MINERALS TOO?
Why does CN.info NOT show a Table where each metal has a list of it's best and worst chelators?

DRUG INTERACTIONS: Iron, calcium, zinc, or magnesium can attach to levofloxacin and other fluoroquinolones and prevent their absorption from the intestine into the blood. Therefore, products (for example, antacids) that contain iron, calcium, zinc or magnesium should be taken at least 2 hours before or 2 hours after levofloxacin. Other drugs that contain these minerals and can similarly interact with levofloxacin include sucralfate (Carafate) and didanosine (Videx, Videx EC).

THE ABOVE ANTIBIOTICS ARE THE MOST COMMON 'TREATMENTS FOR CHRONIC LYME DISEASE AND OTHER CO-INFECTIONS.  IS IT POSSIBLE THAT THESE DRUGS ARE ACTUALLY WORKING AGAINST METALS AND NOT "ELUSIVE" BACTERIAS???


COULD SUSTAINED HIGH LEVELS OF THESE ANTIBIOTICS BE KEEPING HEAVY METALS "TEMPORARILY BOUND UP" UNTIL YOU STOP THE ANTIBIOTICS, LEAVING THE METALS TO UNBIND, AND POISON YOU AGAIN???